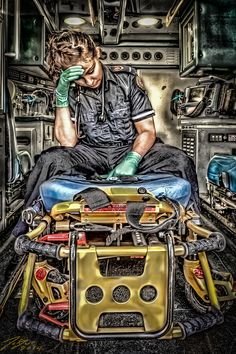 The high-pitched intermittent sounds of the base tones pierced the air. Resonating through my ears, I shivered against the sound bouncing off the walls and back at me. The speakers in the base shouted, “3121, code 4 for a VSA” (vital signs absent). I looked to my partner who looked back at me. I slipped the heavy steel-toed boots on my cold feet and walked out to the garage toward the ambulance. I opened the passenger door and got in. The bay door opened, and we drove outside in silence. The air was frigid and still. The grey-coloured early morning sky cradled both the moon and the sun. I leaned the passenger seat back, closed my eyes, and listened to our siren. Although my eyes were shut tightly, the darkness behind my lids illuminated a red, blue and white; an unfortunate reminder that I was at work. We are driving code 4, highest priority, for a woman who is unable to wake her husband, possibly VSA.

I walked up the black asphalt driveway toward the front door of a brown-stoned house that sat on the corner of a long residential street. The sky was still black but beginning to light up a soft orange and pink from the warming rays of the rising sun. A woman was waiting for us at the front door. She wore pyjamas that looked to be a few sizes too large. She lifted her arms, and with a panicked motion of her hands, she waved at us to hurry. Without taking a single breath, she stumbled through her words and said, "Please come, you have to hurry! My husband… He's… Please help!" Crunching the red and orange leaves that were resting on the front porch with our heavy boots, we walked into the house. Closing the front door behind me, I looked at the woman and asked with an even voice, "When was the last time you spoke to him?" I tried to position my voice into a concerned tone but found it difficult to do so. I felt no distress, unlike what most people would feel during a time such as this. No emotions were best. The woman hastily walked down the hallway behind the kitchen table, urging us to follow with a wave of her hand. Her brown hair was messy and matted. She walked deeper into the house, and I walked behind her with the large blue airway bag resting heavy on my back and the cardiac monitor in my hand. My partner held the red drug bag. I followed the woman down the hallway and into the first door on the right. The room was bright with a light colour painted along the walls. The wooden dresser was resting against the wall on the left side. In front of the tall dresser was the foot of the bed. The blue thin duvet, with an interlocking floral pattern, hung loosely off the edge of the bed. The woman's eyes, swollen, red and wide, investigated mine and said, "I can't wake him up."

I walked to the left side of the bed where the body lay in silence. My partner put her bags down, let out a breath, and awaited on my call, already knowing what was to come. With my purple-gloved fingers, I assessed the carotid artery on the man's neck, looking for a pulse that I already knew was not there. Touching his body was like touching a cold and stiff steel table. The back of his neck, arms and legs had lividity where the deoxygenated blood was pooling due to his sedentary state. There was gross rigor mortis, stiffening of the body, present. The blue pallor of the body indicated to me that resuscitation was futile.

The woman noticed my partner put down her bags and watched as our hurried movements turned to the relaxed removal of our gloves. She broke the air, "Is he... dead?" Her shaking voice told me she already knew he was. I briefly felt her mourning words pierce my chest, but before I could let the despair flood me, I cleared my throat, nodded my head yes and said, "It's been too long for us to attempt resuscitation. I'm sorry for your loss." I spoke in monotone, not allowing myself to return to harsh reality as I mentally drifted myself away from this moment. The woman looked at me, tears filling her eyes. After a brief silence, she cleared her throat and asked, "What do I do now?"

I left my partner in the house to speak and console the woman. Just as I was returning the equipment back to the ambulance, police pulled into the driveway. One of the cops, tall and wearing a solid black authoritative uniform, got out of the cruiser and asked, "Hey, how's your day going?" I smiled in response and said, "Not too bad. First call," I nodded my head in the direction of the house, "He's code 5," otherwise known as obviously dead. Together and empty-handed, we walked toward the house. The cop turned to me and asked, "Have you called the coroner yet?" I opened the door for him and replied, "No, I can do that, but I need to speak to his wife to get more information first." The cop nodded his head and walked through the door.

"Can I ask you a few questions, please?" I asked the crying woman at the kitchen counter. She nodded. I got my notepad ready in hand. "What is his name and date of birth?" She proceeded to answer our questions and give both the police officer and I all the information we required for the deceased. I began my paperwork standing at the kitchen table while another police officer spoke to the wife. It was at that moment I became aware of a soft crying that resonated in the air. I looked down by my feet, and there was a small black and grey Scottish terrier. He wore a worn burgundy collar around his furry neck. He was looking up at me and making a soft crying whine. He then trotted hastily away and made his way back into the bedroom, where the body was lying. I stood up tall and peered down the hallway, watching the dog carefully. I have seen many people mourn, but never a pet. He continued crying at the feet of the police officers and the grieving widow. They never looked down or noticed him. Intrigued, I watched as the dog walked forward into the bedroom, then walked backward out. He did these movements repeatedly. Walk in, walk out. Walk in, walk out. He cried his soft whine, hoping it would wake his owner. He looked nervous and anxious. His body was shaking ever so slightly as he continued to walk into the bedroom, then walk out. His innocence and unknowing, for the first time in a long time, unveiled a hole in my chest. Watching the dog felt like a fist smashing through my body, breaking the walls and flooding me with suppressed sorrow. I felt my chest begin to ache. I went to the front door where I had previously noticed there were dog treats in a bag on the shelf. I picked them up, knelt on one knee, and shook the bag in a desperate attempt to console him. The dog stopped crying and ran over to me. He took a few treats out of my hand and ate them with an excitement. He seemed to momentarily pause his grief as he ate the treats from my hand. I continued to give him treats, but then he looked behind him, back toward the bedroom. He remembered his sadness and returned to the man he seemed determined to stay loyal to, even after death. I sat at the front door, trying my best to coax the dog out. I tried to help him forget his pain, but it was to no avail.

My partner and I got back into the ambulance and drove away. The rest of our shift was not busy but felt never-ending. I constantly thought back to the helpless dog from the little house on the corner. I tried to repress the sadness, like I normally do – like all paramedics normally do – but I was unable to help but feel the pit in my stomach and chest ache. I tried to ignore the pang in my chest, but the barrier that was built over the years around my mind had its first crack, and the flood was coming. Palpitations overwhelmed my heart. Looking out the window of the ambulance, I concentrated on its beat with the thump – thump – thump – thump – "What a great shift, right?" My partner shattered the silence and turned to look at me from the driver's side with a smile on her face. Snapping back to who I was supposed to be, I looked at her with a grin and said, "Can't complain."